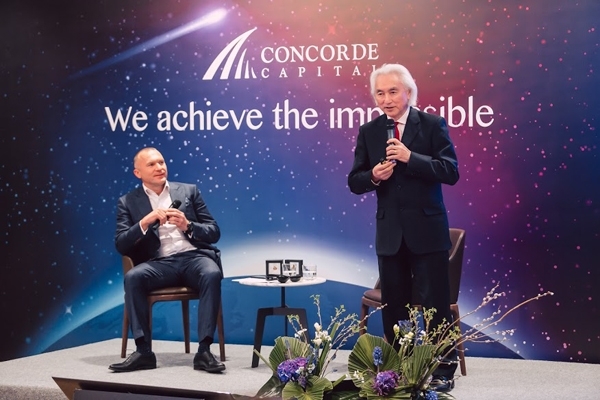 The world famous theoretical physicist, vfuturist, and populizer of science Dr. Michio Kaku led a discussion with a fascinated Kyiv audience on Apr. 6 at the invitation of Concorde Capital investment company and Igor Mazepa, its founder and CEO. The meeting occurred as part of the annual Concorde Capital’s Reception attended by the owners and top managers of the biggest firms, as well as investment leaders.

“Michio is the Einstein of our time. We all know about his predictions for the future, including robots becoming more intelligent than humans in practically all respects by 2029. Yet Michio believes that robots will have ‘insect intelligence’ – powerful, yet only able to resolve certain types of tasks. Today we talked about how new technologies are already influencing the world, and how businesses needs to transform themselves to be successful in the future. For me personally, meeting Michio was one of my most fascinating experiences in recent time. I am convinced that it was just as intriguing an event for our friends and business partners as it was for me,” said Concorde Capital General Director Igor Mazepa.

Michio Kaku is an American physicist of Japanese descent and professor at City College of New York. Famous for his string theory that explains how the universe works, Kaku is a futurologist, visionary, populizer of science and author of several popular science bestsellers who predicts how human life will change owing to technological advancements. Kaku also hosts educational programs on science on the Discovery Channel.

Founder and CEO of the company is Igor Mazepa.