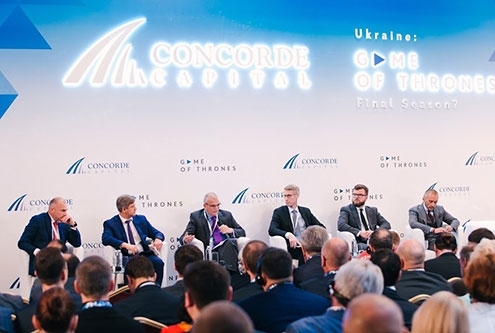 The conference brought together leaders in politics and business, representatives of international organizations and foreign investors.

The Conference’s framework consisted of three discussion panels: Officials, Business and International Investors, whose participants spoke about Ukraine’s new development course, and examined issues of economic development, improving the investment climate and attracting foreign investors. They also discussed the prospects of Ukraine’s cooperation with the IMF and future reforms.

“What’s key to the theme of our conference – GAME OF THRONES: FINAL SEASON?  – is its question mark. It’s a challenge to stop playing games and begin to work together. To work for a single goal – improving the investment climate in our country and the overall welfare. We expected as a result of the discussions to arrive at a greater understanding of what awaits Ukraine in the near future. To understand who is ready to make it better and how. Just whether we were able to do that is for our guests to decide,” commented Igor Mazepa, the CEO of Concorde Capital.

“During the conference, we discussed a whole series of risks that await us in the nearest perspective. The main one being a labor market that has undergone a major challenge of millions of Ukrainian citizens leaving Ukraine. According to the estimates of our analysts, the value of labor in Ukraine is growing faster than productivity. Not any less significant a risk is Ukraine’s debt burden. In the next three years, Ukraine needs to pay off USD 20 bln in debt. And that will be impossible without international support and refinancing,” added Igor Mazepa.

“Currently, for business that is interested in playing by true rules of the game, the moment has come to look to those who will potentially stand up for these transparent rules of the game in the future,” said Parliamentary Vice Speaker Oksana Syroyid, Vice Speaker of the Verkhovna Rada of Ukraine, when opening the Officials panel.

In his turn, Alex Danylyuk, a key adviser to the newly elected president, noted that the largest obstacle for Ukraine to gain the latest IMF tranche could be the decision by the Constitutional Court to cancel the statute of the Criminal Code on illicit enrichment.

“I am confident that that suits parliament,” he said. “If it’s not passed, they will tell voters, ‘The Constitutional Court’s ruling that killed the fight against corruption in the country suits us fine’,” he said.

Andriy Kobolev, the board chairman of Naftogaz Ukraine, said in his remarks that he sees a high likelihood of a full halt to the transit of Russian gas through Ukraine’s territory starting January.

“We and our European colleagues view this scenario as highly likely, even if Gazprom isn’t able to launch Nord Stream 2 this year,” he said.

The Business panel participants discussed the expectations of entrepreneurs from the new government.

«Ukrainian business is rather optimistically and workmanlike is looking at the situation, regardless of who will be the president or part of the new parliament. That’s because our business has learned to adapt to conditions of quickly changing conditions,” said Igor Mazepa.

TAS Group Founder and CEO Serhiy Tihipko said he believes that Ukraine offers a favorable period currently to acquire assets. “The markets have simply lost their mind. What could have been built for USD 100 mln from zero currently costs USD 4-5 mln,” he said. “If you ask what will I do when a default comes, I’ll say, ‘Buy and buy again’,” Tihipko said.

MHP CEO Yuriy Kosyuk supported his colleague, noting that conditions for developing business in Ukraine are currently the most favorable. “Currently, Ukraine offers a far better climate for conducting business than is being talked about,” Kosyuk said. “Our business and the people I work with are very optimistically looking towards the future.”

Among the most intensely discussed topics was Privatbank. All the speakers came to the conclusion that Privatbank’s denationalization can undermine Ukraine’s ability to secure the next IMF tranche.

“If Privatbank is denationalized, it will be a very painful signal for investors,” Pellmar said. “Then we can forget about international financial institutions in Ukraine.”

The panelists also shared a common positive view of the National Bank of Ukraine’s policies and stressed the need to preserve its independence.

“I am confident that without the shock therapy conducted in 2014-2016, the banking system today would have ended up non-operational. And the international investment community highly values the NBU’s contribution in rejuvenating Ukraine’s financial system. Another issue is that the need to stimulate the banking system for enhancing lending has for a long time already surfaced, without which Ukraine’s economic growth isn’t possible,” Igor Mazepa said.

Concorde Capital is the leading Ukrainian investment company, founded in 2004. It offers a full range of international brokerage and investment banking services. The company has attracted more than USD 3 billion in capital for Ukraine’s leading companies in the metallurgical, oil & gas, chemical, agricultural, automobile, pharmaceutical and real estate sectors.

Concorde Capital has conducted international conferences since 2005. They have been the leading platforms to bring together the representatives of Ukrainian government, business and the international community with the goal of discussing economic reforms and investment.

Igor Mazepa  is the CEO and Founder of Concorde Capital.

Igor Mazepa gathered more than 300 leaders in politics and business, as well as foreign investors in Kyiv to discuss Ukraine's future development cours

You may find video from the Conference here https://www.youtube.com/channel/UCqkIbWCqsBvJ5AHQ4Mo3Fsg/videos