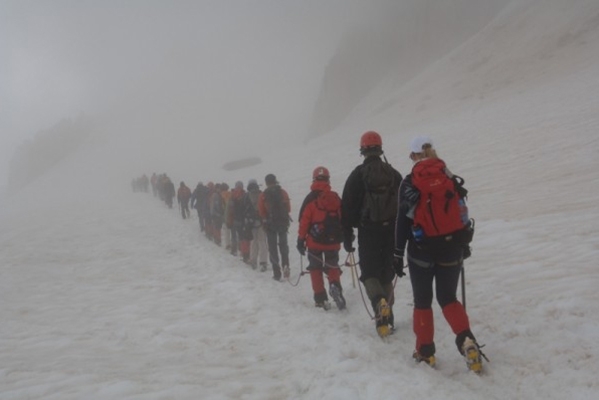 Among the highlights in Concorde Capital’s history was in 2007, when a team of 20 brave souls, otherwise new to mountain climbing, conquered Mount Blanc.
An intense three-day training camp preceded the climb of the 4,810-meter peak, which took place on the Mer de Glace glacier. Such standard devices as “kittens” were new for many of the trekkers, giving them a source of amusement, besides making it possible to reach the peak. After adapting to the new surroundings, the climbers broke up into pairs, assisted by an experienced guide.

On the third day, the team began their ascent from base camp, located at a height of 3,200 meters. They spent the night there and at 3 a.m., they renewed their hike. Sleeping at that height is not an easy task given the thin, depleted air, which affected breathing and how the trekkers felt. Indeed the climb was a serious test for both the physical and moral condition of the Concorde team members. They often saw helicopters flying to take away those whose health suffered and once such helicopter even visited them. But the majority of the group pressed forward and completed the climb to 4,800 meters!

Conquering the peak took about eight hours, leaving everyone with their own unique experience. Someone was dragged by a stronger partner, while another was taken away by helicopter. One team member stumbled and almost fell from a rocky cliff, while others had rocks or icy snow fall upon them at a distance of a mere three meters. No one left the mountain without being challenged and having the hidden potential of their bodies revealed, as well as their physical and psychological capabilities. And not least is the unforgettable memory of watching the sun set above the conquered peak.