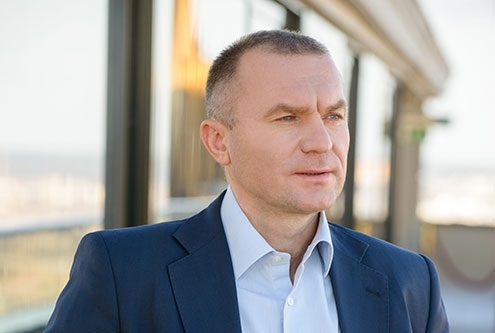 19 October 2019
On October 3, speaking at the Business Wisdom Summit 2019, Concorde Capital CEO Igor Mazepa spoke about his experience in developing as a company leader and how this role has transformed over time.
"When Concorde Capital appeared, the company consisted of two and a half people. I did everything: draw a logo, select colors, do accounting, other routine things. But it was a time of inspiration: when you are rushing, then you like even boring accounting matters," says Igor Mazepa.
"It is clear that this is being transformed into something more global. We have a business that is 100% human. Each person has his own character and his own ambitions. " And the biggest task, according to Igor Mazepa, is to see, to catch peoples’ mood and charge the team so that it runs in one direction for the sake of a result.
“At one point I sat down to think, what unites us all? And I realized that these are values. Perhaps a little story will make it clearer, so, you can have the smartest bankers and the smartest analysts who make the most correct predictions. However, if the girl at the reception is in a bad mood and at that moment a client calls, a client with whom the other employees have already spent a lot of time and effort, and she is rude to that client, then there is zero sense”, says Igor Mazepa.
“Even such seemingly invisible roles and functions can be decisive. My point is that, as a leader, you need to be able to motivate not only the best bankers or salespeople, but the entire team that works for you.”
“As for me, the coolest motivation is when people are involved,” says Igor Mazepa. "They see the whole process, participate in discussions and decision-making, and also see why they go out on weekends or sit at night and work."
People need to be involved and motivated, but by the way, money is not the most important motivator. For example, we have young guys at Concorde Capital who close bright deals worth hundreds of millions of dollars, but a big motivation for them is getting involved in something big that can be shared with their girlfriend, mom or friends. This really charges them. Now Concorde employs 50 people, and I am in contact with everyone.
About Concorde Capital’s values
“One of our values is creativity,” stressed Igor Mazepa. “Our market is very dynamic, lively. You have probably noticed how the dollar exchange rate has changed over the past couple of months. The same is true in the investment market: we feel what will happen in the country and in the economy ahead of time, faster than everyone else. This is due to the “bridge” between European money and Ukraine, which is Concorde Capital. "
The market is very dynamic, we have been the first to introduce innovative products. For example, raising money through an IPO: we brought 20 or 30 million dollars to Concern Galnaftogaz (the network of OKKO filling stations).
Our job is to keep our heads down and keep an eye on potential deals that will continue to make the company competitive. This is thanks to our team working tirelessly together.